Matthew Porter’s body of work is difficult to place at first sight. But perhaps this is neither surprising nor the point of his photographic style. As he once put it himself: “I’ve always wanted to create an exhibition that looks like a group show […] So you would walk into the space and for a second think there were a bunch of images by different artists.”

Porter initially attained some fame, or perhaps notoriety, in the art world with his car photographs. For these images he hunted down miniature models of quintessential American cars. Porter meticulously photographed them in his studio, after which he overlaid the shot of the car with a picture of an American urban landscape. With the cars hovering unnaturally high up in the air, the images refer to just about any police procedural or Hollywood action film in recent history. For the Burnout series Porter captured candy-coloured cars in empty parking lots surrounded by billowing smoke, whereas in Supercharged he treats us to close-ups of dazzling, glittering, blinding chrome contraptions built into the centre of a vibrant car hood. For his Jane Fonda series Porter re-staged pictures of the actress in question. In this way he tries to investigate photographically the capacity of the pop icon to continually reinvent herself. All of these works are funny, tongue-in-cheek and very carefully constructed.

Fast forward to the High Lonesome series. From the get-go it is obvious that the tone has changed to a more serious one. Porter is toying here with visual tropes established by advertising but also images imprinted on our collective memory. In this project he portrays a prototypically looking, but middle-aged cowboy. The man is riding his horse crossing the prairie or he is standing on a ledge overlooking a valley. Occasionally we see him looking up to the sky, where we find the Hindenburg airship hovering over him. These are followed by more pictures of the Hindenburg drifting over the great American plains, the swastika on the tail clearly visible. These jarring contrasts of immediately recognisable but slightly out of sync imagery shake the viewer awake. Are these pictures a reference to Philip K. Dick’s novel The Man in the High Castle? What happened to the ‘Marlboro Man’? What on earth is going on here? The captured scenes do not provide easy answers.

All of these works are funny, tongue-in-cheek and very carefully constructed.

The works from the series Greet the Dust are of an entirely different nature altogether. At first sight they seem to be still lifes, showing yet another variant of this centuries-old concept in art history. The images show an arrangement of various objects in crisp, saturated colours and sharp details. But upon further inspection we notice something is off. First of all, the perspective is all wrong. We see bowls positioned on top of a table, but we also see the table legs at an angle that is virtually impossible. Secondly, we are confronted with a mixture of rather mundane objects and geometrical shapes of unknown materiality.

Then some of the objects that should be solid in real life look so sheer in the photo that all the other objects underneath them become visible. The works suddenly start to resemble photograms, those camera-less pictures created by positioning items on top of photographic paper and exposing the paper in the darkroom. Depending on the transparency and the pressure exerted by the objects onto the paper, the imprint would be more or less defined. The fascinating difference with prototypical photograms is that these images are made in colour instead of black-and-white. What’s more, Porter used multiple exposures shot on film to get these end results, not darkroom trickery.

Matthew Porter (b. 1975) is a photographer and curator living in Brooklyn, NY. He obtained his BA from Bard College and his M.F.A. from ICP/Bard College. His work has been featured in solo and group exhibitions, including After Photoshop at The Metropolitan Museum of Art in New York (2012), Perspectives at the International Center of Photography in New York (2010), Greet the Dust at M+B Gallery in Los Angeles (2012) and The Undefeated at Invisible Exports in New York (2011). Porter’s curatorial projects have included Seven Summits at Mount Tremper Arts in the Catskills, New York (2010), and Bedtime for Bonzo at M+ B Gallery in Los Angeles (2010). Porter co-edited issue 45 of Blind Spot Magazine, and his writing and interviews have been featured in Triple Canopy, Blind Spot Magazine, Artforum.com, and Canteen Magazine. 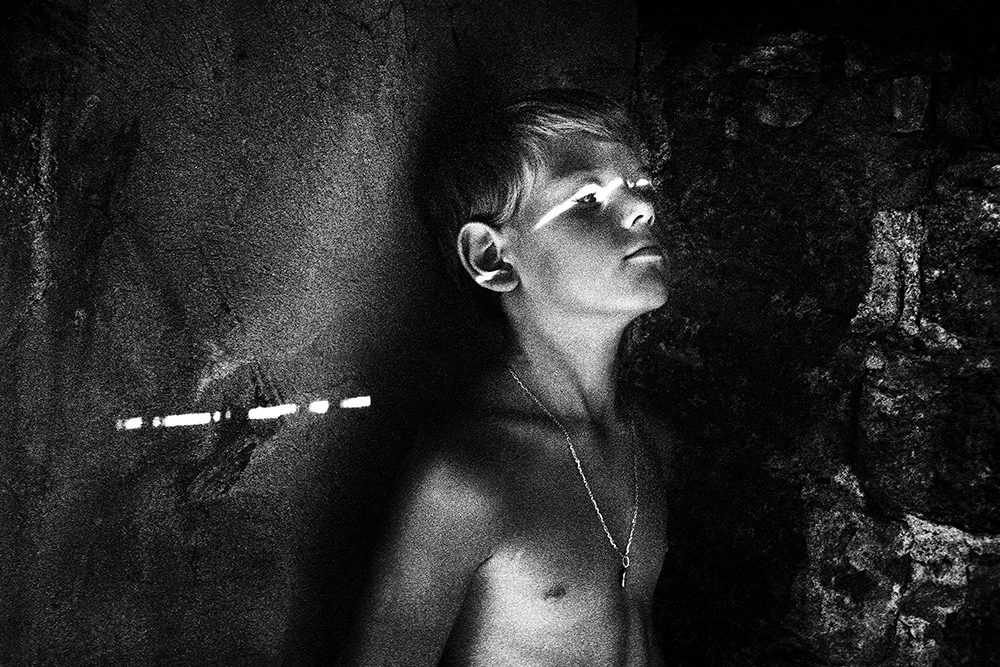